Get fresh music recommendations delivered to your inbox every Friday.

The Codgers Have A Little Fun 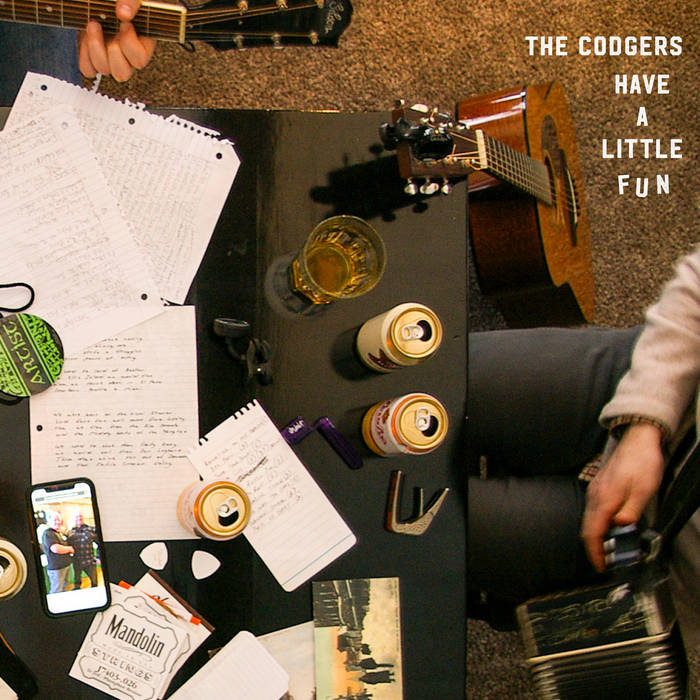 Terry Murphy and I were eating a Hot N’ Ready and drinking Four Loco outside a funeral parlor in Canton, MI when I learned there was a new album in the works. This one was supposed to be called something normal, for once, like Have A Little Fun or Different Parts of Town. Terry said something that afternoon that has stuck with me ever since: “Patrick, you can eat pizza every day of the week, but never ask for pizza on a Sunday.” It’s the kind of Confucian wisdom he’s become known for in folk circles throughout Southeast Michigan. Once, he was playing a set in the bandshell on the River Raisin in Monroe, and he said, “You can cast into the same river twice, but nobody can tickle an honest bartender’s heart like the catfish.” But alas, Terry is just one cog in the ridiculous machine known as “The Codgers.” Like a steam-powered apparatus nobody has much use for at this point in history, they keep chugging away.

We all knew John Freeman and Steve Cousins wrote songs, but we never imagined Matt Balcer had the intelligence or the discipline to pull off such a feat. He’s got a couple on this new one. There’s one about a soldier who rides a bicycle and another about a souped-up muscle car careening off a country road. Producer Dave Lawson has described Balcer’s output as “delightfully perverse, Barbarella meets The Fast and the Furious.”

Make no mistake about it, this is a dysfunctional band. When asked why they haven’t played the last couple parade days at the League, Roxanne LaPuma replied, “The halitosis.” When I didn’t understand her, she put it more simply, “They smell bad!” Which probably explains why Matt Balcer’s new Dearborn practice space is referred to as “The Chicken Coop” by those in-the-know, and I’ll have you know I’m always in-the-know. I’ve got direct lines to everyone of importance in Irish Detroit. I could call Eric Cole and Delia Bryan tomorrow and tell you the exact date of a Saturday brunch seven months from now. I could call Doc Ewing today and have him play his snare drum at a fake funeral I’ve staged for myself. I wouldn’t ever actually do anything along those lines, but I certainly could if I wanted to.

I could pilot Jim Flynn’s boat to Put-In Bay and flick Jake Dimmick off from the top of Perry’s Monument in February if I felt like it. I don’t feel like it, which is why I haven’t done it, cuz I kind of like Jake. The only reason I’m being so candid is that I don’t imagine anybody’s gonna read this thing or buy this CD. Maybe Nick Mansfield’s parents will buy it to settle the nerves of their show dogs in the lead-up to a big competition. I really don’t know. But I’ve gotta wrap it up. My pub quiz crowd is rolling in, and I have a wonderful reuben sandwich from Dunleavy’s Irish Pub waiting for me. As Terry Murphy, my pitbull Murphy’s namesake, is so fond of saying, “Life is strange the minute it becomes good.”

The Codgers are an Americana band who formed in the Corktown neighborhood of Detroit in 2006. They once sparked a crowd surfing incident at Mario's restaurant.

Bandcamp Daily  your guide to the world of Bandcamp